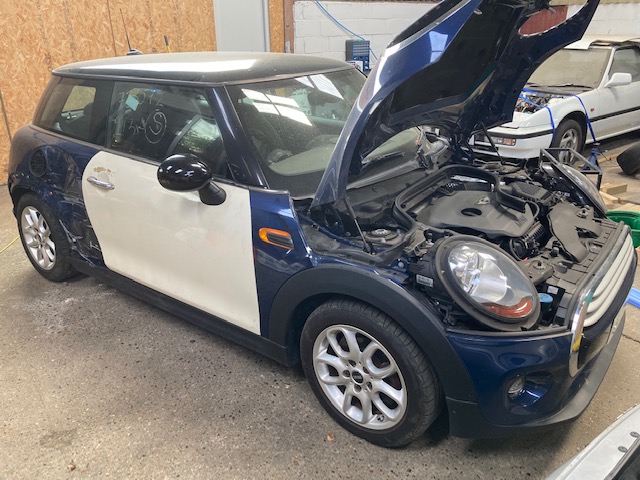 Today we began work on our latest project – restoring a 2014 1.5 Mini Cooper. Bought from a salvage yard for just over £3k, this project seemed like an opportunity too good to miss.

The car was registered as a Cat S due to the damage on the driver’s side door and the rear driver’s side panel – we were reassured by the salvage yard owner that structurally the car remained sound despite being listed as a Cat S – it was just the bodywork that had been damaged. And so, we’ve decided to take a chance and restore the car to its former glory, earning ourselves new experience [no one in the shop has repaired/restored a Mini Cooper before] and a new [ish] car in the process.

When the car arrived on Monday, the battery was flat – first things first, we ordered a new battery so we could replace the old one and make sure that nothing alarming was wrong with the car’s electrics. 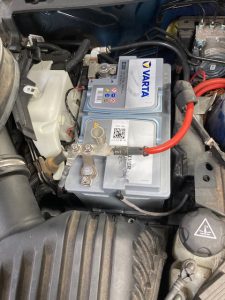 Luckily, all the electrics seemed to be ok once the battery had been replaced, meaning we could then move onto today’s job – fitting the new driver’s side door, and stripping the old one down for parts. As we’re planning on respraying the car an entirely new colour eventually, we didn’t need to make sure the door fit exactly, as we’ll be taking it off in a few weeks for the respray anyway. So we popped off the damaged driver’s side door, and replaced it with the one that we ordered from Ebay earlier in the week: 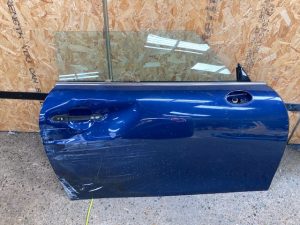 Original damaged door – minus the wing mirror that we salvaged 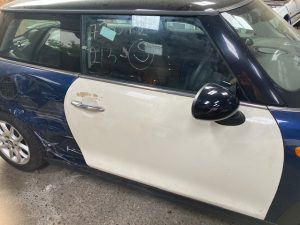 The new door fitted perfectly – despite being replaced like-for-like, there’s always some trepidation in these kinds of projects that somewhere something will have gone wrong and the parts you’ve ordered won’t necessarily match the ones you’ve got. Still, in this case, we were happy with the way the door went on, and we’re confident that once we’ve resprayed it and fitted it properly, it’ll be like new.

We then decided to strip the old door down for parts – this was actually turned out to be the hardest part of the morning! A note to anyone else who may be thinking about restoring a car of their own – make sure you research how to take the door handles/windows out BEFORE you begin work! Still, a few YouTube videos and several cups of coffee later, we managed to get the window out. We certainly learnt a few things on the way, which will no doubt come in useful once we have to strip the new door down for the respray.

And that’s all we had time for today – until the rear panel arrives, there’s not too much else to do. The rear panel will be slightly more difficult to fix but shouldn’t take too long [fingers crossed]. Then we’ll do the respray, and unveil the finished car – so watch this space!